The above mention topics merely provides a broader idea of Recent trends in agriculture sector in developed and developing economies. However, this should not be considered a final list of themes. Any topic covering these broader areas will be worth researching. However, students are expected to submit a high-quality project/case study to meet the Leaders Institute standards.

Reveal your ability to relate the research topic to the broader framework of knowledge in one of the themes of Agricultural sector;

Provides a clear, accurate and cogent idea and appropriately documented; Make a clear statement about the problem;

Report should be structured as :

List all tables and figures included in a document;

You are Required to address the following tasks in your assignment

Contribution Of Agriculture Sector To The Nation

Figure 1: Share of the economy by the agricultural sector in Australia 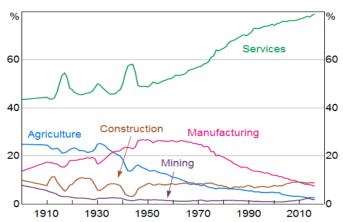 Figure 2: Percentage of employment opportunities created by the agricultural sector in Australia

Australia is a significant source of exports fruit, dairy, sugar, meat, and cereal. Land-holdings are defined by intricately interlinked, export-oriented, capital-intensive, owner-operated, specialized, and large. The figure below shows the structure of agricultural production in Australia: 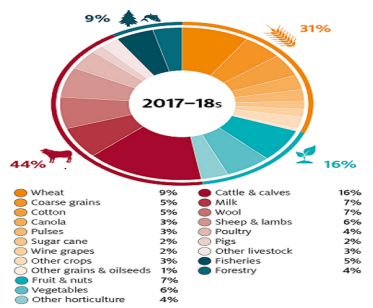 From the figure above, the major agricultural product produced by the Australia formers is cattle farming which contributed to 44% of the total agricultural production. The total cattle production in the country peaked in the mid-1970s and has been declining. The majority of beef cattle are kept in New South Wales, Northern Territory, and Queensland.

Australian Government has implemented various measures to assist the agricultural sector. Some of the measures incorporated by the Australian Government include tax concessions, drought relief, R & D support, and adjustment assistance. Drought relief provides tax exception to farmers during drought seasons to encourage agricultural production and also to enable the farmers to attain their major requirements during all seasons. Australia has been faced with the major occurrence of drought in some sections of the country which resulted in the failure of agricultural production and huge losses to farmers. This was the major reason for the implementation of drought relief tax to except the farmers from paying tax. The government has also assisted farmers in research assistance through various experimental studies conducted by the government department to analyze soil science and crop performance under different conditions.

The major factors affecting the agricultural sector in Australia include climate conditions such as drought, changing patterns of consumer demand, changes in export markets, changes in the relative costs of services and goods, technological innovations and changes. These issues are explained below:

Since the dismantlement of statutory price and marketing support schemes in the mid-1980s, the government assistance to the agricultural sector has significantly reduced. This dismantlement was performed as part of a greater program of microeconomic reform and this step market the decline of some agricultural industries while other industries were indirectly affected. The major agricultural industries that were affected by this mode include tobacco, eggs, and sugar. The effective rates of assistance approximate show that agriculture assistance is inherently volatile because of the fluctuations in the global prices of commodities.

Australia has experienced three major widespread and prolonged droughts since the systematic weather recoding started in the late-19th century. Recently, eastern Australia has experiencing prolonged dry conditions over the months of winter characterized by high temperatures. The occurrence of drought has greatly affected agricultural production in the country especially crops. Drought has in the past affected the agricultural production due to lack of enough water for plants. The decrease in production has also caused a reduction in global supplies resulting in a decrease in the export early by 6%. Recently, drought has resulted in a smaller reduction farm produce by 27.5% during the drought periods. The recent drought in Australia has affected majorly New South Wales and Queensland, while Western Australia has been experiencing normal climatic conditions.

Figure 4: Effects of drought on GDP growth and agricultural export

The drought that occurred between 2002 and 2003 resulted in a significant reduction in the exports of agricultural commodities by approximately 23%. However, the country recovered instantly and the export volumes increased by 40% in the following years. Drought has also affected the economic growth rate of the country as shown in the figure above.

The trade in agriculture in Australia is majorly affected by the sales to three major markets, namely China, the United States, and Japan. These markets contribute to 42% of the agricultural exports since 2003. The changes in export markets have greatly affected the export of agricultural commodities to these countries due to the decline in wool prices and the arrival of other competitors in the market such as New Zealand and the UK. The major factors causing changes in the global market include loss or preferential access for Australian farmers and the establishment of the European common market.

Another issue affecting the Australian agricultural sector is the advanced economies that are currently changing the patterns of consumer demand. Research shows that are the economies develop, the relative proportion of income depends on food by the population decrease. The consumption data of Australian household confirm that a reducing proportion of the income of the households is not spent on agriculture-intensive products and food. That has affected other agricultural products such as tobacco and alcohol and the rate is still declining. The demand for cotton and wool has also decreased significantly as a result of changing consumer demand.

The agricultural sector in Australia has a history of innovations such as the introduction of combined harvester and stump jump plough, the use of satellite technology to assist in decisions, improvement of weed and disease control, and large scale irrigation through artesian dams and water. However, the introduction of these technologies has affected the long-term productivity of land because of the excessive use of farm chemicals, and also they have become outdated. Currently, modern technology in agriculture such as the use of the automated system has further improved the efficiency of agricultural production. However, most farmers cannot afford these technologies making their production stagnant instead of improving. The implementation of agricultural technologies has further been affected by land limitations since the majority of farming in the country is conducted on a small-scale.

Bianco, A. (2016). Green Jobs and Policy Measures for a Sustainable Agriculture. Agriculture and Agricultural Science Procedia, 8, 346-352.

Sarker, A., Bornman, J., and Marinova, D. (2019). A Framework for Integrating Agriculture in Urban Sustainability in Australia. Urban Science, 3, 50.