The objective of this project is to assess the critical development challenges faced by countries, particularly those of the Global South and identify what are some of the realistic options available to such countries.

Countries may formulate their foreign policies based on what they consider to be their key development priorities, their resource availability and economic positioning or “strength”.

You will select any one country from either an emerging or less developed country, analyze its current development status and discuss what foreign policy approach- the use of hard OR soft power OR both- it is using to realize its development objectives. Has this approach been successful?


Your type-written assignment should:

In researching your project, consider but do not limit yourself to the following. They are to be used as guides only. Please do not answer questions these as your research paper!!
1.How do you define development?
2.Is the country’s geographic location of strategic importance?
3.What is the overall ideology of the government?
4.What is the long term objective of the country?
5.Economic (GDP, major sectors, Balance of trade, economic policies, trade agreements/trading partners, technological)
6.Diplomatic agenda/policies in relation to these challenges.
7.Have regional/international organizations facilitated its overall objectives?
8.Is it investment friendly?
9.Does it possess natural resources? Financial strength? Technological capacity? Human expertise?

Uganda is one of least developed countries in the African region with having lower development index. Thus, they are having the need of holistic development schemes covering parameters. In this essay, the long term development objective of Uganda will be discussed along with their key economic factors (Eia.gov , 2018). The ideology of the government will also be discussed in this essay. Some other parameters such as relevancy of the external organizations and foreign policy approach of Uganda will also be evaluated. The report will follow a structured format whereby the different aspects of the country will be described thoroughly which shall then be followed by the analysis of the correct policy for the organization. The resource analysis will be divided into three parts namely the natural resources, the diplomatic resources and the economic resources. The recommendations will be based on this analysis.

Economic Measures can be rightfully described as those measures which can be largely used in order to understand the current state of the government and helps in analyzing whether the country has adequate capabilities or not.

Figure 1: The GDP of the country

The table has tracked the overall GDP of the country over the past few years.

The major sectors of the Ugandan economy is made up of different sectors like that of the Agriculture which comprises of 24.2%. The Industrial economy compromises of around 25% of the economy and the Services contribute to around 50% of the Uganda`s economy. The Agricultural aspect of the economy comprises of various Fisheries, Animal Husbandry, Dairy as well as Crop related and other sub sectors (Factmonster.com , 2018). However, it has to be mentioned that the industry of Uganda is quite limited in nature with the most important products being the coffee plantations and the manufacture of light consumer goods and textiles also take place. 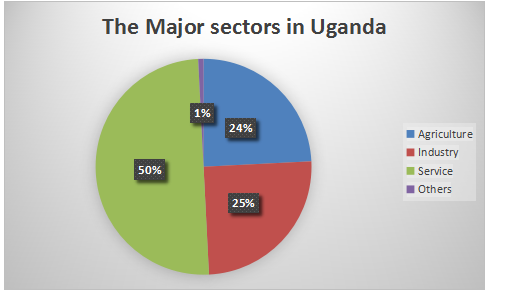 Figure 2: The Major Sectors in Uganda

Figure 3: The Balance of Trade

The given graph reflects upon the negative balance of trade in Uganda.

The different economic policies which a government makes use of can be defined as the different policies relating to the setting levels of taxation, governmental budgets, supply of money and interest rates. Due to the poor nature of the economy the government makes interventions into a large number of sectors of an economy which range from industries, education, trading, banking and other ownership segments as well in order to ensure that the economy of the country flourishes.

Figure 4: The Unemployment Rate in Uganda

The trade agreements are a crucial part of any economy has they go a long way in ensuring that the economy prospers. The United States signed the Trade as well as Investment Framework Agreement with the different East African Communities (EAC) in the year 2008 and another one called Common Market for Eastern and Southern Africa (COMESA) in the year 2001, which allows Uganda to benefit from trade under both agreements.

The different technologies which are existent in Uganda are goods and services, human activities and capabilities to enable technical activities (Revenuewatch.org , 2018). These aspects are opposite to that of culture, however, with respect to the country, these aspects are not very well developed and the company is required to go a long way in ensuring success.

Ideology of the government

Uganda is having democratic republic type of government with having president as the head of the state. National Resistance Movement is the ruling party with majority of the seats. They are right wing political party with having more inclination towards the capitalistic approach and nationalism. However, in the recent time the capitalistic approach of the government is helping in attracting investment in the country. It is reported that percentage of population under the poverty line is rapidly decreasing from 2006 (Bandyopadhyay & Green, 2016).

The key pillars which are required to be analyzed while creating framework for Uganda are as follows:

There are different kinds of long-term objectives of Uganda which is inclusive of the following:

It is the first aspect in which this can be seen that Uganda has tried in winning and acclaiming the goals in an efficient manner. The main achievement is the universal primary education wherein the government tried in deserving praise for the tuition free primary education for the different poverty related individuals who are staying in Uganda. The enrolment into the primary school rose from more about 3 million children in the year 1996 to more than 7.2 million in the year 2011. In the same year, more than 84%of the children aged between six years to twelve years were in school which helped in suggesting that Uganda is well placed in order to score goal of more than 100% in the year 2018 (Chiputwa, Spielman & Qaim, 2015).

This is the other long-term objective of Uganda government wherein the health of the women is the main aspect which is required to be analyzed in an efficient manner. The concept of equality between the men and women employees is essential which is required to be enhanced in the future and this will help in managing the overall effectiveness of the firm in a positive manner (Chiputwa, Spielman & Qaim, 2015). Nearly more than 50% of the different primary schools’ enrolments are girls and the main goal of the Uganda government is to improve the overall situation in the different aspects which is inclusive of the equality in the different sectors such as from education to the different employment sectors as well (Blattman et al., 2016).

With the help of improvising these two major aspects, this will help the government of Uganda in transforming the society in the current scenario to the modern aspect within the next thirty years and this will be helpful for the overall growth of the country in a positive manner (Cypher, 2014).

Contribution of Regional/International Organizations in Uganda

The United Nations in Uganda helps and works in improving the lives of people and the staff members at the different levels which are committed to making a proper difference. UNDP in Uganda tried in representing a global kind of network with the different diverse experiences who are working towards the common goal which helps in empowering the lives and build resilient nations as well. Furthermore, the different international organizations tried in empowering the lives of the various individuals in such a manner which will be beneficial for the company in a positive manner (Blauw & Franses, 2016).

The diplomatic policies are policies which can be defined as either economic, cultural, energy or public in nature and done by the diplomats of the country. The diplomats are generally assigned to the different parts of the world in order to ensure that the success of the company in the different aspects can be maintained. Moreover, the other countries have ambassadors as well as embassies which are supported by consulates and consulate heads.  Uganda has a large number of embassies and higher commissions of various countries like Argentina, Columbia, Indonesia, Spain and Portugal to ensure good ties.

Resources of the country

The enrollment in the country for higher education rose from 14097 in the year 2011 to 200000 in 2017 and this can be largely contributed to the increase in the population growth which has taken place (Focus-economics.com , 2018). The population has grown around 3.3% per year and hence, around 5% of the Ugandans enroll at the University every year.

The technological capacity of the country can be described as the goal which is considered by the country at large and the technology goal of the country is to strengthen the national capability and ensure that they are successfully able to generate, transfer and apply the different scientific knowledge, skills and other technologies to ensure that Uganda prospers in the long run (Indexmundi.com , 2018). The vision 2040 aims to ensure the private sector as well as education, infrastructure and the underdeveloped services as well as agricultural aspects of the economy and proceed towards an economy of communication and information technology.

As this can be seen that since Uganda is the underdeveloped country and there is lack of the different kinds of resources, this can be witnessed for the Uganda government implements the soft power which is the overall influence that the country has by the virtue of the culture along with the enterprises (Dorosh & Thurlow, 2014).

As this has been seen that the main objective of Uganda is to improve the overall development in all the aspects of life such as personal and professional front, therefore this is necessary to enhance the long-term objectives such as bringing equality among the women and men in different fields such as education and the other professional fields (Van Ophem & Antonides, 2016) On the other hand, with the implementation of hard power which is exercised through economic or military means will not be helpful for the small country to manage the overall economic growth of the country positively (Blauw & Franses, 2016).

Therefore, from the above aspects, this can be analyzed that the country Uganda is including the soft power which is helpful in achieving the overall economic development of the country in a positive manner.